Dr. Mom: How being a single mom has influenced my life as a PhD Student

I’m a PhD student, and I’m a single mom. You may think this is a contradiction, as those two roles often don’t overlap. While it can be challenging at times, I’m proud to be doing both, and I’d like to share a bit about my experience juggling the two. 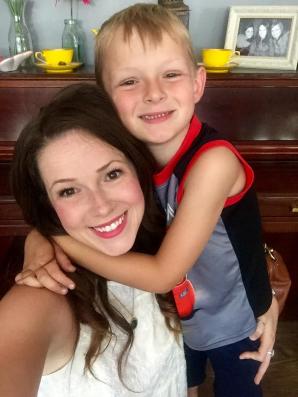 I found out I was expecting my son, Isaac, when I was 20 years old. I was in my third year of university at the time, but I was unfocused, unmotivated, and had never learned how to study and self-teach. I had gone through multiple changes in course enrollment, switched faculties twice, and even went to another university for a year. When I found out my son was on his way, I was excited, but also relieved that I now had a “good excuse” to not continue my education in the fall. I dropped out of university, got engaged and had my son, all within a year. I loved being around him as much as possible, but around his first birthday, I realized being a stay at home mom was not a “forever” option for me. My relationship with my son’s father had been deteriorating, and I realized that if we were to separate, I would be left with no education and very few options for employment.

In 2011 I re-enrolled in the University of New Brunswick. My goal was to do something after my undergrad, but whether it was grad school, med school, law school, or something else, I didn’t know at the time. Upon graduating from my BSc, I applied to the MSc program at UNB. Going elsewhere would have involved either leaving Isaac behind and only seeing him when I came to visit, or uprooting his life and taking him away from all his friends and family. I decided remaining in New Brunswick was the best option for both of us – when you have a child, your decisions aren’t just your own anymore.

I considered several different areas of biology and spoke to many people about what kind of research they were doing, but I knew I would be happiest working with insects, my longtime love. I joined Dr. Steve Heard’s lab at UNB in September 2015 as an MSc student. My thesis (which has since grown into a PhD) focuses on study of the invasive Brown Spruce Longhorn Beetle (Tetropium fuscum). I study interactions between the invasive T. fuscum and the native congener T. cinnamopterum, and the possibility that mating disruption is contributing to the slow North American spread of T. fuscum. To explain briefly, this involves several of different kinds of mating experiments, as well as some NGS Illumina ddRADSeq to generate a SNP library and screen for introgression in the local Tetropium populations.

In graduate school, you’re presented with this dichotomy, wherein there are times when you have obligations that bind you to your office, or the lab, or keep you in the field, and other times you have flexibility to leave work and go meet up with friends in the middle of the afternoon. As long as your work is getting done, there is little policing as to when it’s being done. One of my favourite little perks of being a graduate student is that when my son has a “snow day” and gets to stay home from school, I often have the freedom to stay home with him rather than sending him to daycare. On the other hand, if he happens to get sick on a day when I have a full TA load, it can be rather difficult to just “take the day off.” Being a grad student isn’t a regular job, so you can’t always just “call in sick.” In ecology in particular, I find that my busy times come in waves. My experiments are large, taking about a year to plan and prepare for, and lasting several months. This means that when I have live beetles emerging, I have to be in the lab as much as I can, doing as much with them as possible before their short lives are over. However, when I don’t have an experiment running and I’m mostly writing and reading papers, it’s much easier to work from home.

While it’s true that being a graduate student sometimes means I have less free time to spend with my son, I believe that having less free time causes me not to take time spent with him for granted. He has always known a life where I’ve been in school and studying. Because I spend as much of my free time with him as possible, he understands that when I tell him I need to get some work done, it’s not something I necessarily want to do, but something I HAVE to do. He also knows that the second I finish my work I’ll be ready to do something fun with him.

I also have to be more organized in order to schedule and fit everything in – making sure the days I TA late don’t interfere with my son’s extracurricular activities, scheduling late lab nights when I know he will be with his father, etc. There are many challenges associated with being a single parent pursuing post-secondary education, but for me, it’s worth it. 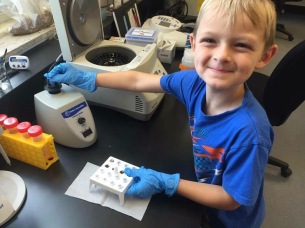 I had a chat with one of my undergrad students from a lab I TAed a while back, wherein I told her I was a single mom doing my PhD. She then proceeded to tell me she had two young children at home and had just returned to school. She said she had been feeling trepidation about whether or not she’d be able to get through while fulfilling her obligations to her children. She said that finding out I made it through my undergrad and into graduate school while being a mom, made her feel more confident that she would be able to do the same. I want to let others know, especially younger women in academia, that past choices don’t need to define your future path in life.

At the end of the day, my son is extremely proud of me, and what I’m accomplishing for him and for myself. He sees how hard I work and my hope is that it will be a good example to him, and that it will inspire him to be the best he can be.

Author Biography: Jennifer Anderson is a PhD student at the University of New Brunswick. Her research focuses on characterizing the North American invasion of the Brown Spruce Longhorn Beetle (Tetropium fuscum). She enjoys going for hikes, trying new recipes, and going on bug-catching adventures with her son Isaac.