Lovers and fighters, and how their coexistence affects their evolution within an eco-evolutionary feedback loop

To contribute towards integrating the field of eco-evolutionary dynamics and move the field forward, scientific journals from the British Ecological Society, including the Journal of Animal Ecology, have just published a cross-journal special feature entitled “The diversity of eco-evolutionary dynamics: comparing the feedbacks between ecology and evolution across scales”, edited by Franziska Brunner, Jacques Deere, Martijn Egas, Christophe Eizaguirre and Joost Raeymaekers *.

How evolutionary changes (like shifts in genotype and phenotype frequencies) and ecological changes (like the size, composition and growth of an animal or plant population) affect each other is a topic of intense and growing investigation in biology. Why? Because for a long time, ecologists ignored evolutionary processes as they were assumed to occur at much longer time scales (thousands to millions of years) compared to ecological processes (days to years). Vice versa, evolutionary biologists ignored ecological processes as these were assumed to occur at such short time scales that their effects would be unnoticeable at the long, evolutionary timescales. However, over the past decades, notions have changed from “nothing in biology makes sense except in the light of evolution” [1], to “nothing in evolutionary biology makes sense except in the light of ecology” [2], to finally “nothing in evolution or ecology makes sense except in the light of the other” [3]. 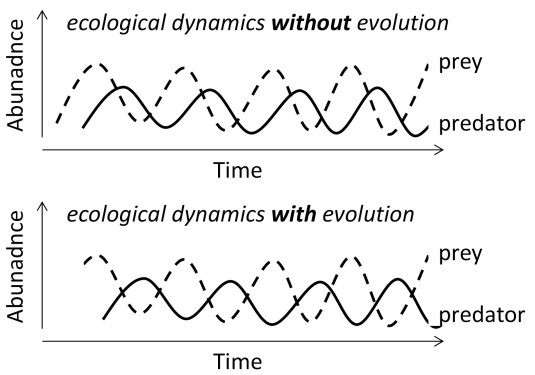 Figure 1. A summary of the findings of Yoshida et al. [4]: The ecological dynamics of predator and prey abundance in a rotifer-algae system differ, depending on whether or not prey can evolve in response to variation in predator

Alternative reproductive tactics (ARTs) are an extreme form of discrete phenotype expression within single populations, and occur across many taxa. An excellent example are the male fighters and scramblers of my favourite study species, the bulb mite (Rhizoglyphus robini). Fighter bulb mites possess weapons for male-male competition over access to mates, whereas scramblers are defenceless. Fighters can also mortally injure conspecifics. This is also what my then Master student Jasper Croll found in 2015 in an experiment where he had observed that fighters are more likely to kill juveniles predisposed to develop into fighters [5]. Jasper next took on the challenge of using a population model to investigate if fighter expression can feed back to affect population size and structure, thereby altering the evolutionary dynamics of ART expression in an eco-evolutionary feedback loop. 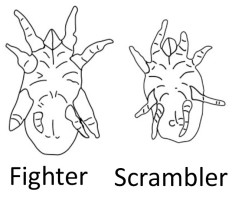 Jasper found that the intraspecific killing by fighters can extend the conditions under which ARTs evolve because fighters that kill other fighters decreases fighter fitness. Importantly: this effect can be nullified when benefits from killing are incorporated, like increased reproduction through increased energy uptake. The

se results from Jasper’s work is now published in the Journal of Animal Ecology [6], and form part of a Special Feature entitled “The diversity of eco-evolutionary dynamics: comparing the feedbacks between ecology and evolution across scales”; a cross-journal special feature from the British Ecological Society, edited by Franziska Brunner, Jacques Deere, Martijn Egas, Christophe Eizaguirre and Joost Raeymaekers.

And how can we use all this knowledge? It should lead to a solid understanding of how an environmental perturbation, such as a change in precipitation, temperature, predation pressure, etc., affects the two pathways of an eco-evolutionary loop: does a perturbation mainly affect ecological variables, with knock-on evolutionary consequences through the ecology-to-evolution pathway, or would it mainly result in an evolutionary shift in trait expression? Or perhaps both are affected simultaneously? These are essential insights to understand the dynamics of the natural world around us, and how they respond to the ever greater changes in the environment.

*A similar version of this post was posted on isabelsmallegange.com.

Author biography: Isabel Smallegange is an Associate Professor of Population Biology at the University of Amsterdam. Follow her @I_Smallegange, or check out her blogs at isabelsmallegange.com, where she also discusses issues regarding the work-life and gender balance in academia.