Madison Grant and the Eugenics History of Biodiversity Conservation

Conservationist and eugenicist Madison Grant, whose book The Passing of the Great Race influenced the policies and ideologies of Nazi Germany. Image credit: Wikimedia Commons.

On its face, it’s hard to find much wrong with the concept of biodiversity conservation: given that we’re losing species at an alarming rate, let’s do our best to save some of them – especially because we often depend on species and ecosystems for things like pollination and carbon sequestering. But you don’t have to look too far back into any profession or discipline to find dark secrets hidden in its history, and conservation is no exception. I think it’s worth taking a moment to hear these kinds of stories, because we’re often only informed of the good deeds of the corrupt figures of our past. Equally worth considering is the fact that outdated, uninformed ideas are making a comeback (or never really left). So let’s rewind to 1916: the year that a prominent conservationist published a book of ideologies that Adolf Hitler eventually considered to be his “Bible.”1

Madison Grant was credited with all kinds of accomplishments in the arena of conservation: from co-founding organizations like the Save the Redwoods League, the Bronx Zoo, and the American Bison Society to developing what are considered the foundational principles of wildlife management. He was also anti-war, skeptical of imperialism and a supporter of birth control. All of these descriptors make him sound like a fairly progressive person for his time, but they leave out one line on his resume that made the largest impact by far: his book advocating for eugenics called The Passing of the Great Race, recognized by Stephen Jay Gould as “the most influential tract of American scientific racism.”1 I came to learn about Madison Grant from the recent PBS documentary The Eugenics Crusade, which profiles several other historical figures that similarly had one foot in a seemingly good camp and the other firmly planted in the belief framework offered by eugenics – for example, Margaret Sanger who was a leader of the birth control movement.

So how does one take the leap from a concept like conservation or birth control to eugenics? Eugenics “aims to improve the genetic quality of human populations,”2 with the idea of ‘genetic quality’ mainly being used to discriminate against people based on disabilities, mental health, sexual orientation, and concepts of race. While some historical sources use the word ‘science’ to define eugenics, it is a pseudoscience at best: supposed traits such as “feeble-mindedness” and “sexual immorality” – purposely vague so as to be able to target broad swaths of people – were presumed to be directly inherited, with no studies to even attempt to support this assumption. It is not so hard to see how the birth control movement could walk hand-in-hand with these ideas, because sterilization was internationally popular as a means to prevent people with ‘undesirable genes’ from reproducing. What seems a harder jump is that between conservation and eugenics – how do those concepts sit together? 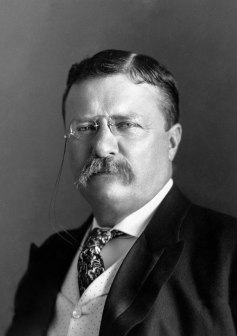 President Theodore Roosevelt, considered by many to be a conservation hero, was also a supporter of eugenics. Image credit: Wikimedia Commons.

It turns out, comfortably. In the United States, Theodore Roosevelt is considered one of the most influential public figures to draw attention towards conservation. He co-founded the National Park Service and during his tenure as president established many new national parks, forests and monuments. Teddy Roosevelt’s conservation philosophy was always underlined by white supremacy: from justifying the conquest of other races to justifying the use of the natural resources gained from these acts, the jump is not so large after all. A report by the National Conservation Commission to President Roosevelt, heavily endorsed by the President as he passed it on to Congress, concluded one section with the recommendation: “If our nation cares to make any provision for its grandchildren and its grandchildren’s grandchildren, this provision must include conservation in all its branches — but above all, the conservation of the racial stock itself.”3 Preservation of natural spaces, species, and resources were viewed as being intimately linked to preservation of the white race and its power. The rhetoric boiled down to essentially this: preservation of nature means preservation of what belongs to white people, the superior race and the only race qualified to steward these resources. As Charles Wohlforth puts it in this excellent piece: “Roosevelt was worried about the loss of a special American quality of strength and ingenuity that supposedly had evolved among whites on the frontier.”

Madison Grant was simply following in the footsteps laid out for him by Roosevelt and his peers. The Passing of the Great Race parroted the rhetoric and ideologies maintained by Roosevelt, his advisors, and numerous other prominent eugenicists. Grant’s support for the birth control movement was likely motivated by his alignment with eugenics, and as Secretary of the New York Zoological Society it was largely his influence that resulted in the abhorrent display of Ota Benga, a Congolese pygmy, alongside apes at the Bronx Zoo. The historical links between ecology, evolution, conservation, and eugenics are rampant: the founder of the eugenics movement was Francis Galton4, Charles Darwin’s cousin, and Darwin himself wrote about supposed evolutionary differences among the races. His followers eventually extended these ideas into the infamous social Darwinism movement. Even the idea of races existing can trace its roots back to biology’s forebears: Carl Linnaeus, the founder of taxonomy, categorized humans into racial categories based on skin colour.

It might be tempting to consider this all a dark legacy that we ecologists, evolutionary biologists, and conservationists can put in the past now. Unfortunately, all three of these disciplines are still resoundingly white and middle-class, a fact that makes the white supremacist legacy and its lasting impact clear. As Amy Harmon recently pointed out, eugenics is also far from dead: as the field of genetics progresses to delve deeper into the inheritance of complex traits like intelligence, misconceptions and willful misconstruing of this research is fueling a resurgence of eugenics-based ideologies. As recently as 2017 white nationalists rallied at a gathering to chug milk, apparently to show off the trait of adult lactose tolerance more commonly found in white people than others. As eugenics is rearing its ugly head once more, it is important for us to know the damage it has done before in our disciplines and to play an active role in dissuading pseudoscientific rhetoric. As Dr. David Nelson, president of the human genetics society, stated in an interview for Harmon’s article: “there is no genetic evidence to support any racist ideology.”

Author biography: Sarah is a Master’s student studying the evolutionary biology of wētā (giant insects from New Zealand!). While waiting nervously to hear back from her thesis committee, she is working as a consultant for the Calgary Zoo’s Centre for Conservation Research. She tweets @nasonicus and posts science-y photos @wild.nason. She also spends a lot of time thinking about corgis (the empirically best dog) and how to obtain one. Sarah can be reached via e-mail here: sarah.e.nason@gmail.com